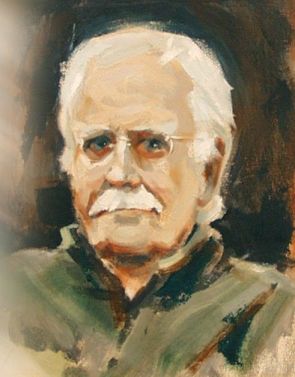 John F. Thamm lives in Spokane, Washington and has been an accomplished portrait and
landscape painter for many years. He teaches painting workshops in the United States and
Europe with Farbi Flora in Berlin, Germany. Born in Wendell Idaho, Thamm studied art with
Herman Keys in Spokane and went on to receive his undergraduate and Master of Fine Arts
degrees from the University of Idaho. John’s work is in private collections throughout the United
States and the Wolfson Museum in Miami Beach, Florida.

In 1978 John became friends with Bob Ross when he was stationed at Fairchild Air Force Base.
John was an art instructor with the Community Colleges of Spokane. They would paint together
in John’s studio in Peaceful Valley. Bob and John remained good friends until his death in
1995.

His recent book, published in June 2010 “ Vets: Fifty Portraits of Veterans and Their Stories”
features area servicemen and women from every branch of the armed forces who fought in
wars from World War II-Iraq. John set up an easel in the lobby of the Spokane Veterans Medical
Center and painted the veteran’s portraits and recorded their stories. The show of the paintings
was featured at the Spokane Veterans Hospital and part of the collection is presently at the
new Behavioral Health wing of the VA. View a video of the project on KSPS’ Northwest Profiles
series online or order the book by contacting us at the information below.

John has been a courtroom sketch artist for TV and newspaper media including CNN,
ABC, Associated Press, KREM, KXLY and the Spokesman Review. Notable trials he has
covered were Ruby Ridge, the Branch Davidian-Waco Trial, and the Aryan Nations Trial in
Coeur d’Alene, Idaho. John’s portrait of Gerry Spence is in the attorney’s private art collection.

John’s political work expresses his comments on the elements of war, politics and
religion. He has done extensive research into the Kennedy assassination and produced a body
of work around the subject.